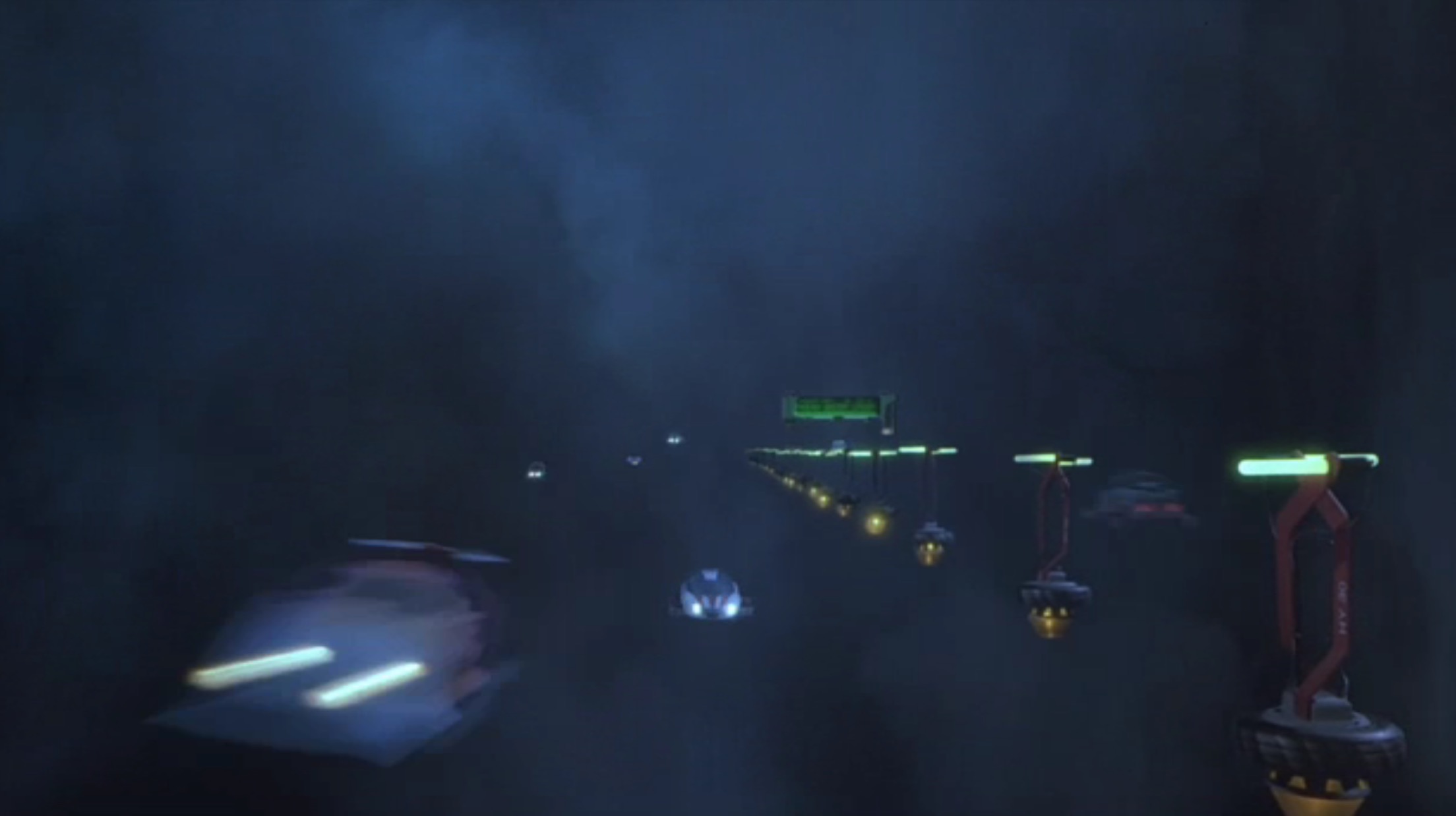 After the opening credits and shots flying through the clouds, the camera descends into dark rainclouds just above a highway in the sky.  We later learn that this is called the “skyway”.  The DeLorean appears with three sonic booms and nearly runs into a taxi cab.

We’ll put aside the fact that somehow the DeLorean went from about 15 feet above the ground at the Lyons Estates and ended up above a busy skyway and just judge the predictions made in this scene.

“What the hell was that?”

Yes, taxis are still around in 2015, but companies like Uber and Lyft are starting to give them some fresh competition.  This isn’t much of a prediction though and we don’t think the writers were really going out on a limb saying that taxis would still be around.  That’s like predicting that we’ll still drive cars and wear clothing in 30 years.  A real prediction would be if something like that didn’t exist in 30 years.  We’re going to skip over a lot of these non-predictions as this site continues.

The real prediction here is the skyway full of flying cars.  This shows us that not only do flying cars exist, but they are plentiful!  There’s even enough that (somehow) the skyway can become jammed later in the movie.  Clearly they’re not only operated by just the super rich.

The skyway has many floating lights in the center.  Without any road needing illumination (which is why streetlights are elevated), it’s not clear why these are designed to look like streetlights when floating balls would work just as well.  Perhaps it’s for aesthetic reasons.

The skyway also has floating signs.  The first legible one says “Courthouse Square Exit” in an LCD calculator font.  Presumably the message on the sign can be changed electronically.  We do have this on some road signs in 2015 where they may be used to warn drivers of detours or traffic delays, but they don’t use LCD calculator fonts.  Most often, they’ve got large pixels instead. 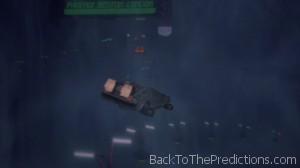 When the DeLorean takes the Courthouse Square exit, you can see a sign that says “Phoenix – Boston – London”.  Growing up a couple hours from Boston, this sign fascinated me since I first saw the film.  However, after having driven across the United States a couple years ago, I realized just how ludicrous that sign is.  Later in the movie, when the DeLorean leaves 2015, Doc accelerates to 88 mph.  This means that traffic is going less than 88 mph.  Even if we assume it was a straight line, it’s 367 miles from Los Angeles Phoenix, 2,605 miles to Boston, and 5,456 miles to London, England.  That means even at 85 mph, it would take over four hours to get to Phoenix, over thirty hours to get to Boston, and over 64 hours to get to London.  If it takes that long, would enough people actually drive that far that you’d need to put it on a sign?

…but flying cars everywhere and a skyway?  Nope.  Not even close.  If there were flying cars, they’d likely need to have some sort of autopilot or else we’d have people crashing into each other and falling out of the sky all the time.