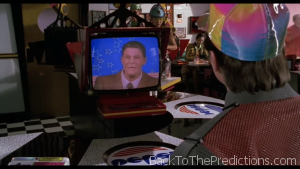 In the Cafe 80’s, Marty is greeted by a screen hanging from the ceiling with a Max Headroom styled Ronald Reagan telling him the specials.  The waiter is able to move around the cafe to serve people at the counter and in booths.

There must be some sort of voice recognition built in because the President listens to Marty when he says, “All I want is a Pepsi!”

Considering that these robotic waiters are in use at the Cafe 80’s where we’d think nostalgia would be more important than showing off the latest technology, it’s logical to assume that these automated waiters must be in place in nearly every restaurant in Hill Valley.

In our 2015, some restaurants have started introducing online ordering or have placed tablets at tables that can be used to order food and drinks.  However, restaurants are still using real human wait staff.

Having Ronald Reagan, Ayatollah Khomeini, and Michael Jackson in the style of Max Headroom is still a pretty good nod to the 1980’s in our 2015.  Although the Ayatollah had died prior to the release of Back to the Future Part II, neither Reagan nor Jackson survived until 2015.