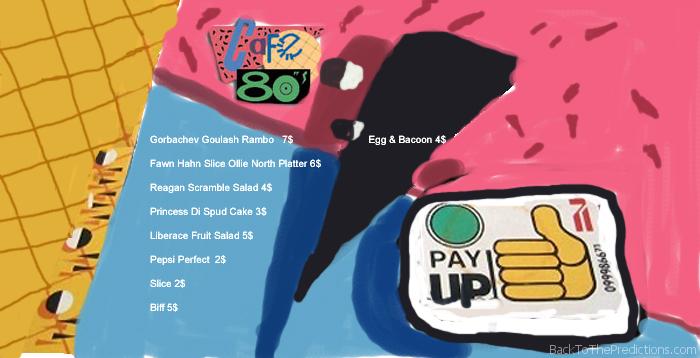 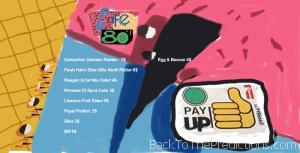 A common misconception in Back to the Future Part II is that a Pepsi costs $50 in Hill Valley in 2015.  This is because Doc says, “Go in and order yourself a Pepsi.  Here’s a fifty.”  Doc is merely handing Marty a $50 bill.  He never says that a Pepsi actually costs $50.  Keep in mind that Marty still has enough cash left to buy the Gray’s Sports Almanac (assuming he actually did pay for that Pepsi at some point).

In any case, we do have evidence to provide the exact price for food and drink at the Cafe 80’s.  Although it’s impossible to read on screen, a menu was made for the tray of some of the automated waiters in the Cafe 80’s.  The menu items are as follows:

It’s odd that the prices are listed with the currency symbol after the dollar amount.  Although it’s common for some countries to put their currency symbol at the end, it’s almost never done in the United States.

As for the prices themselves, they’re very reasonable.  $2 for a Pepsi is fairly common at restaurants in the United States.  If you saw these prices on a cafe menu in our 2015, you probably wouldn’t think anything was overpriced or underpriced.  Looks like they hit the mark here.

…although I’m not sure I want to know what the “Biff” is.