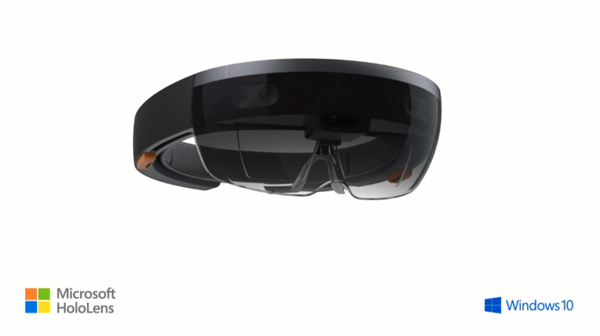 Today, Microsoft unveiled a new product called the Microsoft HoloLens.  What they showed looks remarkably like the entertainment glasses that Marty Jr. and Marlene McFly are wearing at the dinner table.

Since this happens near the end of the 2015 scenes in Back to the Future Part II, I didn’t think this site would be getting to those glasses for months.  I figured when I got to it, I’d compare it to Google Glass and remark on how Google has discontinued Glass and these things looked big and clunky.

…and then Microsoft came out and announced a device that looks like they were intentionally trying to copy the design seen in Back to the Future Part II.  There’s the dark lens wrapped around the front, the silver strip at the top, and thick frames on the sides.  The biggest difference in the design of the HoloLens is that the frames on the side have a less sleek design.  The glasses in the 2015 of Hill Valley were supposed to be made by JVC, not Microsoft.

Marty Jr. is watching TV on his glasses and complained he can only watch two channels.  One of the channels was ESPN where he was watching the Chicago Bears play against the Spacers in football.

Marlene was using hers as a video telephone.  When Needles called, her call was interrupted and “PHONE” blinked on the lenses.

Okay, maybe the “Spacers” aren’t a current NFL team and the Microsoft HoloLens doesn’t blink “PHONE” or display the channel number, but you have to admit that the similarity between Microsoft’s HoloLens and Back to the Future‘s video glasses is uncanny.  It remains to be seen what applications people will develop for the HoloLens, but watching video and having a video phone call are two features promoted on Microsoft’s official HoloLens web site.

You can watch discussion of the Microsoft announcement on TWiT.tv’s Windows Weekly episode 397.