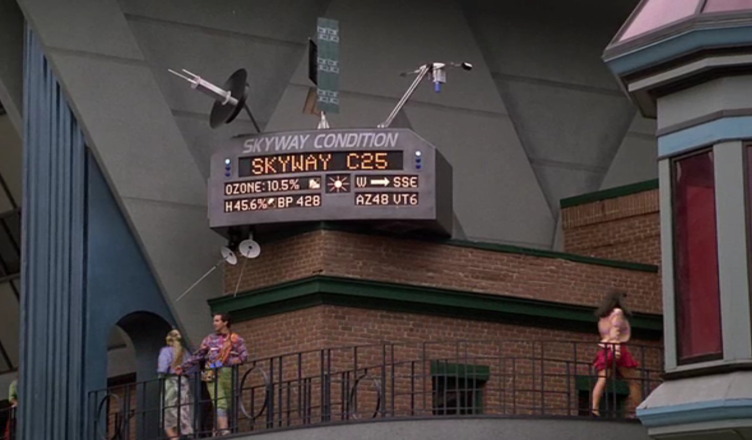 High above Courthouse Square in Hill Valley is a sign marked “Skyway Condition”.  The gray sign has digital text to display the name of the skyway being reported along with a report for the ozone quality, weather, winds, humidity, and barometric pressure.  A sun indicates it’s sunny.  The status changes to indicate if the skyway is “skewed” (jammed).  It’s not clear what the bottom right box is indicating or what units are used for the barometric pressure.

Ozone usually averages 0.000004% of our atmosphere.  Either they thought we’d have some rather severe ozone issues by 2015, it’s somehow measured on a different scale, or the crew made up a number figuring that nobody would be posting a still image of it on the Internet in 2015.  If someone was going to report on air quality, the Air Quality Index seems like a much more likely method.

These days, we do have signs using the same digital text on our highways to let us know if there are traffic jams ahead.  Banks have been displaying the time and temperature on their signs for decades…including back before Back to the Future was filmed.

Traffic reports these days are even more accurate than this sign.  You can load up Google Maps, Apple Maps, or Waze on your phone and see exactly where the heavy traffic is on the roads.  You could also look up the weather.

Yes, the ozone reporting is bizarre, but we can easily get traffic and weather reports at a glance and you can find them on signs.  The sign in Courthouse Square may not be totally accurate, but it’s close enough that we’ll give them a pass on this one.

By the way, check out all the antennas on that sign.  Isn’t that kind of similar to the proliferation of cell phone towers everywhere?