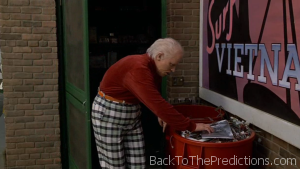 In the alley next to the Blast from the Past store where Doc first lands the DeLorean there is a billboard on the wall that is an ad for USAir that encourages people to “Surf Vietnam”.

The Vietnam War ended in 1975, so it was still fairly fresh in the minds of adults by Marty’s time of 1985 and when Back to the Future Part II was released in 1989.  Although the war was over, vacationing in Vietnam seemed rather outlandish at the time.

It’s now 2015 and you can find travel agents offering vacation packages to Vietnam and other locations in Southeast Asia.  Popular destinations include the museums, Cu Chi Tunnels, Sa Pa terraces, Thien Mu Pagoda, seaside resorts, scuba diving, and Vietnam’s beaches, some of which have surfing.

Although it seems unlikely that an airline would attempt to attract passengers by selling them on surfing in Vietnam when surfing’s not a hugely popular sport, the fact remains that Vietnam is a travel destination that has significantly increased in popularity since the 1980s and you can surf there.