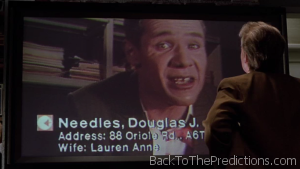 Marty is just sitting down to dinner when a call comes in.  “Dad, it’s Needles.”  Marty takes the call in the other room on the TV.  He’s greeted by the image of his co-worker, Douglas J. Needles.

Video calls like this seemed futuristic in 1985.  Back then, we would talk about “video telephones” like on The Jetsons.  People would wonder if anyone would actually want video telephones because then you’d have to worry about what you looked like before answering the phone.

In reality, video chat really took off within the last few years as Internet speeds in residential areas has increased enough to make online video practical.  People are making video calls on a regular basis using Skype, Google Hangouts, FaceTime, or some other method.  One-way video broadcasts using YouTube, Twitch, Snapchat, Periscope, and many other services are commonplace.

If Marty has an Xbox One hooked up to his TV, a Skype video call like the one he has with Needles doesn’t seem unusual.  Skype doesn’t show the caller’s personal data, but it’s possible to store that sort of information in a contact list app.  The only part of this entire scene that doesn’t work is that Marty’s boss is able to call Marty and come up on screen without any action on Marty’s part.  Video chat software prevents that sort of thing, but perhaps Marty’s boss has hacked  it somehow in order to spy on his employees.  (Marty should seriously sue his boss for that.  He’d likely win.)