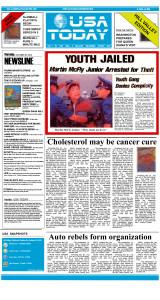 The October 22, 2015 edition of USA Today costs $6 in Hill Valley.  The price is in the upper-right corner written as “6 DOLLARS”.

It’s entirely possible that sometime in the next seven months there will be a massive price increase for the daily edition of USA Today, but it seems highly unlikely that it would triple.