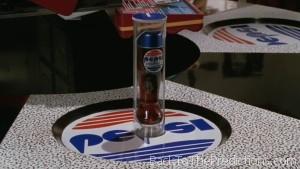 Marty clearly learned from his experience in 1955 not to try to order anything other than the advertised beverages.  Pepsi Free?  Tab?  Nope, just a Pepsi.  The Cafe 80’s provided him with a bottle of Pepsi Perfect.

Maybe PepsiCo will introduce “Pepsi Perfect” by October, but there’s no sign of that yet in our 2015.