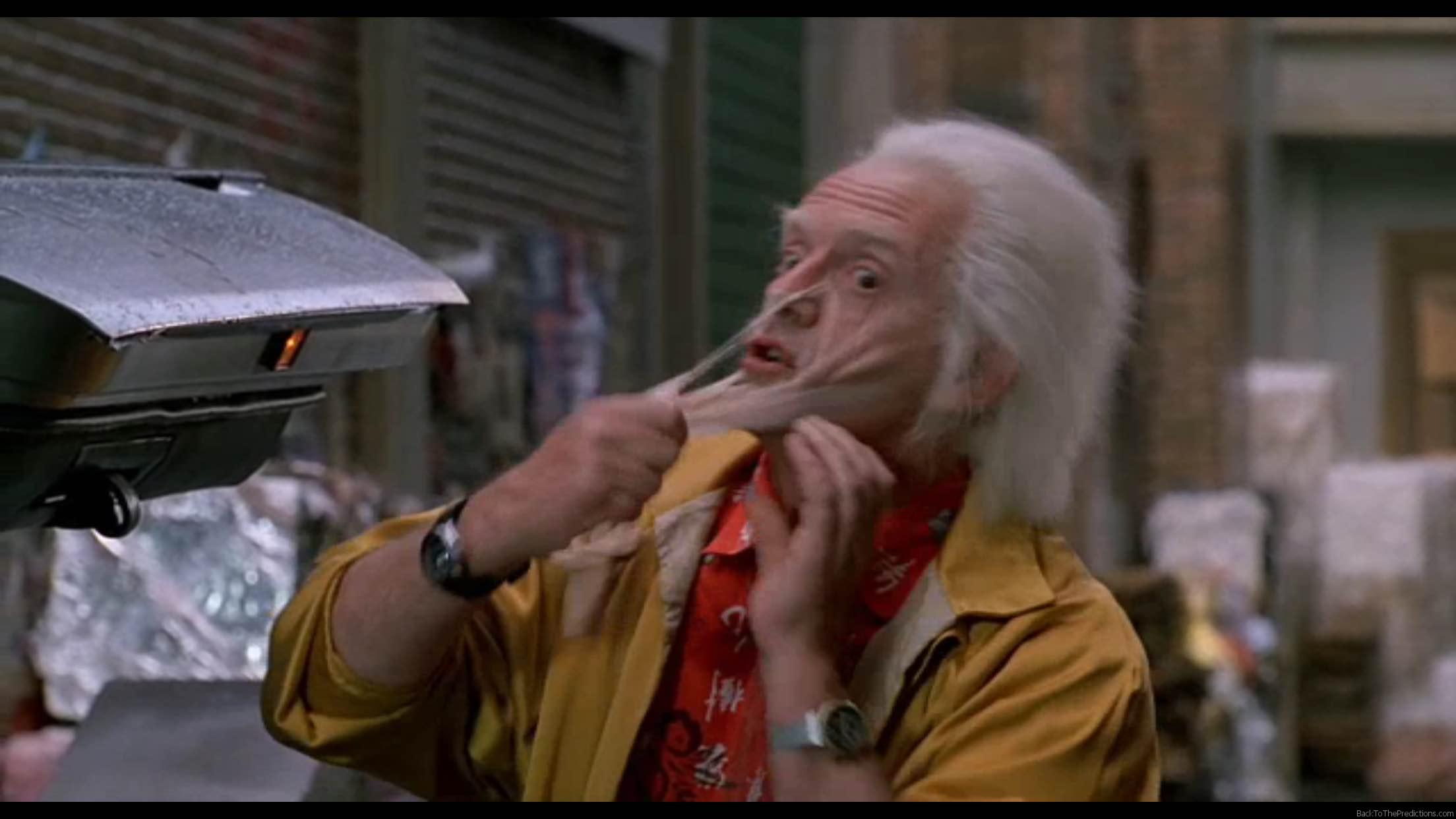 Marty steps out of the DeLorean and starts to take in his surroundings when Doc interrupts.

“Excuse the disguise, Marty, but I was afraid you wouldn’t recognize me.” 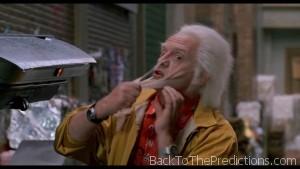 Marty looks back and sees Doc removing a latex prosthetic from his face.

“I went to a rejuvenation clinic and got an all-natural overhaul.  They took out some wrinkles, did a hair repair, changed the blood, added a good 30 or 40 years to my life.  They also replaced my spleen and colon.  What do you think?”

This bit was added to the film so that Christopher Lloyd wouldn’t have to wear extra makeup throughout the second and third films.  It’s a silly moment because the makeup was fairly subtle to begin with and it’s unlikely Marty wouldn’t have recognized Doc.

Doc says he went to a rejuvenation clinic, but doesn’t mention when.  We’ll have to assume it was in or around 2015 and that he didn’t make a side trip to the distance future for this procedure.  However, it doesn’t appear to be commonplace in Hill Valley of 2015 because Marty Sr., Jennifer, Lorraine, George, Biff, and Terry all appear to have aged naturally without having any work done.  In fact, when young Jennifer is found by the police officers in the alley, they comment, “47? That’s a hell of a good facelift!”  Their surprise indicates that they haven’t seen any people who have had their youth restored by a rejuvenation clinic.  If it does exist in Hill Valley of 2015, it’s definitely not commonplace.

As for the procedure that Doc outlined, let’s run down the list.  “They took out some wrinkles” could be done with a face lift of some kind.  Those were around in the 1980s too, so that’s really nothing new.  However, I think we’re supposed to assume there’s some new way to do this because Doc doesn’t actually say “face lift”.  There is a business in Hill Valley of 2015 called “Bottoms Up”, so perhaps they use a similar process.

Hair Club for Men may transplant hair, but they don’t actually repair it.  Hair is a protein filament that grows from follicles in the skin.  Perhaps the hair repair is meant to “repair” the follicles to encourage more hair growth?  If the “hair repair” was repairing the hair itself, it would likely have to be done on a regular basis as the “repaired” hair grows out and new hair replaces it.  We’re left to wonder why Doc’s hair is still white if he got a hair repair and not blonde like it was in 1955.

Doc also had the clinic “change the blood”. Human blood transfusions have been around since 1840, but “change the blood” implies that all Doc’s old blood was removed and new blood was put in.  It’s not really clear why Doc would need his blood to be changed unless he was suffering from some blood-related disease.

Doc also had the clinic replace his spleen and colon.  Doc didn’t say if he got newly grown, artificial, or transplanted organs, but he must have been suffering from some serious medical disorders to have had all this work done.  He mentions it in an offhand remark, but in our 2015, an organ transplant would be a pretty big deal and not exactly something someone would do as elective surgery.

Putting it all together and seeing “old” Doc change to a younger looking Doc thanks to a “rejuvenation clinic”?  That’s not something that can be done in our 2015…and given the residents of Hill Valley in 2015, it might not even be able to be done there.