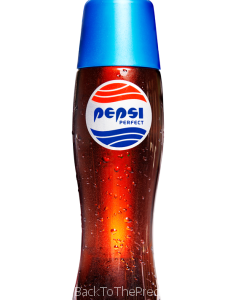 We’ve previously covered Pepsi Perfect and ruled it a failed prediction because it didn’t exist.  Well, it looks like that’s going to change.  Pepsi recently announced that they will be releasing a limited edition version of Pepsi Perfect on October 21, 2015.

The price increase might help justify why Doc Brown gave Marty a $50 bill for the Pepsi Perfect, but it doesn’t change the fact that it’s still just Pepsi Made with Real Sugar in the 16.9 oz bottle, not a vitamin-enriched Pepsi as it was intended to be in the movie.  The bottle’s logo is also not a perfect match with what was seen in the movie, but it’s close.